John Wilkes Booth’s father and two brothers were legendary actors of their day, celebrated throughout the nation.  He entered the family business, becoming a special favorite of theater audiences in the South.  Blessed with extraordinary looks and an athlete’s grace, his romantic legend rivaled his professional reputation.  With the catastrophe of the Civil War, though, Booth’s acting career foundered.  He became alienated from his talented family, which rejected his pro-Confederate sympathies.  By 1864, Booth was intimate with Confederate secret agents and sympathizers from Washington, D.C. to New York City to Montreal.  He assembled a band of misfits and incompetents around an outlandish scheme to kidnap President Abraham Lincoln and hold him as a hostage for peace negotiations.  After that plan misfired, and while the South gasped its way to surrender in the early spring of 1865, the 26-year-old Booth turned his odd group to the business of assassinating Lincoln and his top officials – as much an attempted coup d’etat as a murder plot.  In a nation of conspiracy theorists, the Booth Conspiracy remains one of the least-understood, though it committed America’s greatest political crime.  David O. Stewart will explore its surprising twists and turns. 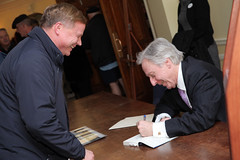 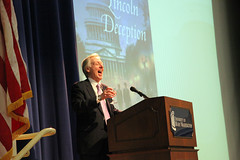 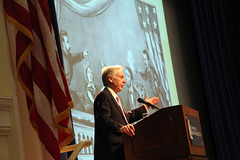 Stewart lectures in front of drawing of Lincoln assassination 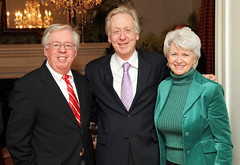 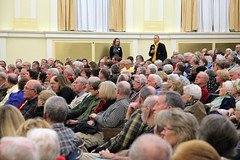 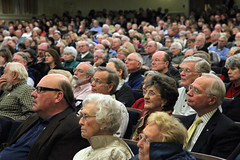 After practicing law for many years, David O. Stewart began to write books.  His first, The Summer of 1787: The Men Who Invented the Constitution, was a Washington Post bestseller and won the Washington Writing Award as Best Book of 2007.  Two years later, Impeached: The Trial of President Andrew Johnson and the Fight for Lincoln’s Legacy, was a Davis-Kidd Bestseller and was called “by all means the best account of this troubled episode” by Professor David Donald of Harvard.  In 2011, his American Emperor, Aaron Burr’s Challenge to Jefferson’s America, an examined Burr’s Western expedition, an undertaking that shook the nation’s foundations at a time when those foundations were none too solid.