It might well be argued that Martin Luther King, Jr., was the most instrumental figure for change in twentieth-century America—certainly among those who were not elected officials (e.g., Franklin D. Roosevelt).  His career from his leadership of the Montgomery bus boycott in 1955 until his assassination in 1968 at the age of 39 placed him at the pinnacle of the Civil Rights Movement in the United States.  His 1963 “I Have a Dream” speech is regarded as the most powerful speech in American history, save perhaps Lincoln’s Gettysburg Address.  David Garrow brings to the topic extensive research including more than 700 interviews with all of King’s surviving associates, as well as with those who opposed him, and enhanced by the author’s access to King’s personal papers and tens of thousands of pages of FBI documents.  His talk will be structured around the theme of “the political education of Martin Luther King, Jr.” 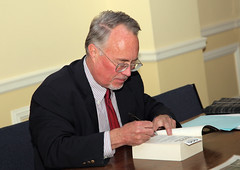 Signing his book, Bearing the Cross 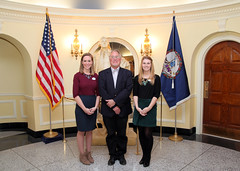 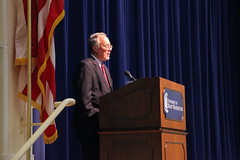 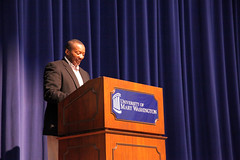 David J. Garrow was born in Massachusetts in 1953, graduated magna cum laude from Wesleyan University in 1975, and received his PhD from Duke University in 1981.  Currently Research Professor of History and Law at the University of Pittsburgh’s School of Law, he taught previously at Duke University and the University of North Carolina, Chapel Hill, and held prestigious visiting professorships and research appointments at the College of William and Mary, American University, Emory University, and Cambridge University.  He has published on a wide range of subjects, particularly in the areas of legal history, civil rights, and women’s issues.  He contributes regularly to major publications such as the Washington Post, New York Times, LA Times, New Republic, Atlantic Monthly and the New York Review of Books, as well as academic journals including The Supreme Court Review, Yale Law Journal, and Virginia Law Review.  He served as series advisor for “Eyes on the Prize,” the award-winning PBS television documentary on the Civil Rights Movement.  His book Bearing the Cross: Martin Luther King, Jr., and the Southern Christian Leadership Conference won the 1987 Pulitzer Prize for biography and the annual Robert F. Kennedy Book Award.