William Shakespeare is the best known writer in the world, and the one about whom we know least of what we really want to know. His achievements are easier to feel than to describe, and his life and works often seem to bear little relation to each other. This lecture will suggest some new connections between the two. Its focus will be primarily on the dramatist as a professional whose acting and writing career was the most important part of his life. It will also draw on the increasing awareness of the possible role of collaboration in Shakespeare’s work and the diversity of the audiences for which he was writing. 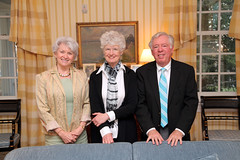 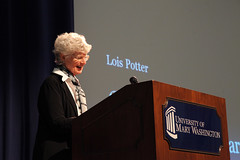 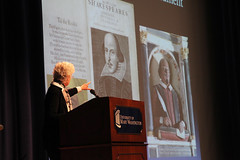 The Bard over Professor Potter's shoulder 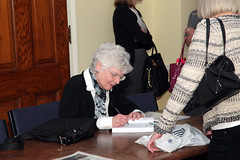 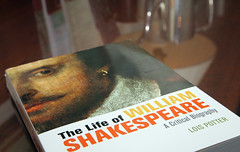 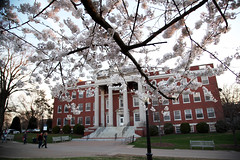 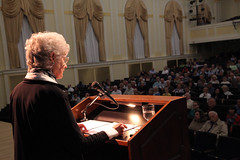 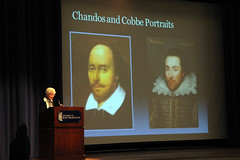 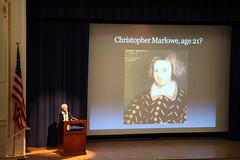 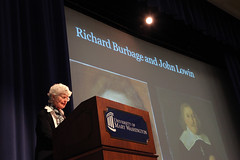 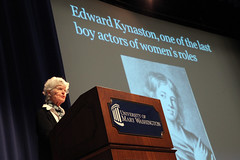 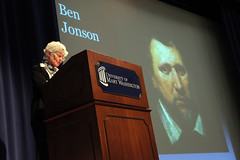 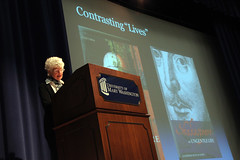 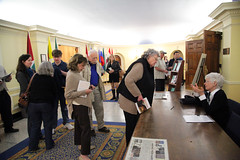 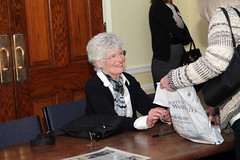 Lois Potter is a graduate of Bryn Mawr College and earned her PhD at Cambridge University, where she was a Marshall Scholar.  She lived in the UK for thirty years, teaching at the universities of Aberdeen and Leicester. In 1991 she returned to the US as Ned B. Allen Professor of English at the University of Delaware, of which she is now Professor Emerita; she has also been a visiting professor at Paris III/Sorbonne Nouvelle and Tsuda College, Japan. Her publications include books on Milton, the literature of the English Civil War, the history of drama, the Arden edition of The Two Noble Kinsmen, the theatrical history of Twelfth Night and Othello, and Robin Hood, and many theater reviews.  The Life of William Shakespeare (2012), her first biography, was chosen by reviewers in The Guardian and The Times Literary Supplement as one of their “books of the year.”