To revolutionaries he was a proletarian rebel. To idealists, he was a liberator who abolished slavery. To moviegoers and television viewers he was a sword-and-sandal icon. Marx and Lenin both praised Spartacus and he was a major figure in Soviet ideology. US President Ronald Reagan considered him a freedom fighter.  Who was Spartacus? He wasn’t a fictional character but a genuine historical figure. Spartacus led a revolt (73-71 BC) of gladiators and slaves that shocked Roman society at the time and that has echoed through the ages. Barry Strauss’s lecture will examine the man, the myth, and the legacy. According to him, the real, historical Spartacus is even more fascinating than the swashbuckling Hollywood creation. 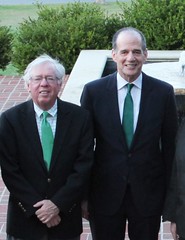 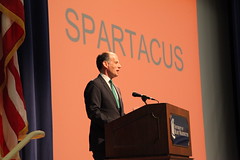 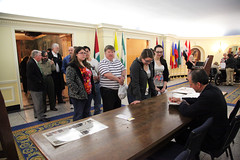 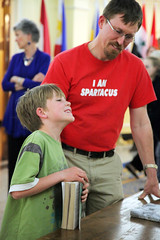 Professor Strauss with a young fan 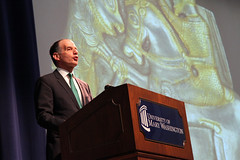 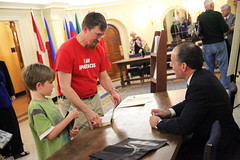 Barry Strauss is Bryce and Edith M. Bowmar Professor in Humanistic Studies and Chair of the Department of History, Cornell University.  He is the author of seven books, including The Battle of Salamis (2004),The Spartacus War (2009), and Masters of Command: Alexander, Hannibal, Caesar and the Genius of Leadership (2012), named respectively as one of the best books of the year by the Washington Post, Books & Culture, and Bloomberg. He is currently writing a book on the death of Julius Caesar. Publishers Weekly writes, “No one presents the military history of the ancient world with greater insight and panache than Strauss….”