Although Charlie Chaplin honed his craft in the now dust-covered formats of vaudeville and silent film, the world’s first global movie star remains an important voice who speaks to us across time about key questions involving political power, mass culture and our shared humanity. In his films, Chaplin asked: do ever-expanding media formats empower political elites and allow them to manipulate and thereby dominate ordinary citizens? Does technology rob us of our natural connections to each other as fellow citizens? How can we fight back? Chaplin’s work did not always offer satisfying answers to these questions, but at least he made sure we laughed along the journey. Unlike many filmmakers of his era, Chaplin often challenged political authority and power, and in particular highlighted the absurdity of following the lead of political blowhards and would-be dictators. To Chaplin, even “The Tramp” knew that human beings were smarter, kinder and better than to do that. The iconoclastic, controversial and tumultuous life of Chaplin provides an important backdrop for appreciating his work as one of the history’s most effective users of mass media to shape political and cultural messages – messages that speak to his time, and ours. 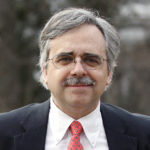 He worked for 10 years as a newspaper journalist before becoming a professor, and has lectured widely on the news media, the presidency, and elections before US and international audiences.

A prolific scholar, he has written 7 books including :Presidential Communication and Character; The Nightly News Nightmare; Spinner in Chief; and his most recent: Late Night With Trump: Political Humor and the American Presidency.

He is also author or coauthor of dozens of scholarly articles on the presidency, the mass media, U.S. public opinion, and Virginia politics. His political commentary has appeared in a wide range of media outlets, including the New York Times, Washington Post, PBS NewsHour, Politico, C-SPAN, and BBC World.

He is currently Professor of Political Science and International Affairs, and Director of the Center for Leadership and Media Studies, at the University of Mary Washington.

During his tenure at Mary Washington, Dr. Farnsworth has earned the reputation of being an outstanding teacher, as evidenced by winning the University's three most prestigious awards for excellence in teaching, a distinction further attested by his being the 2017 recipient of the Virginia outstanding faculty award from the state Council of Higher Education for Virginia.

He will be fondly recalled by Great Lives patrons for his five previous presentations on Presidents Harry Truman, Lyndon Johnson, Richard Nixon, and Ronald Reagan, as well as iconic entertainer Johnny Carson.