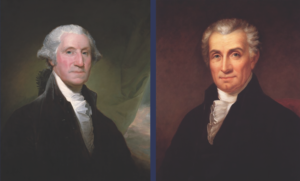 From Revolutionary War battlefields to the arenas of American politics, George Washington and James Monroe navigated a complex relationship. Mutual regard and affection, born in the shared experience of fighting for the cause of independence, eroded steadily amid the early Republic’s changing political and diplomatic landscape. The resulting estrangement revealed much of the character of both men.

The emergence of Federalist and Republican factions during Washington’s presidential administration enflamed both domestic and foreign affairs. Monroe’s first diplomatic mission to France was a casualty of this partisan divide. His advocacy of Republican principles and the traditional alliance with France ran counter to the Federalists’ goal of improving relations with Great Britain. Recalled from his post in disgrace, Monroe aired his grievances with Washington publicly and received harsh criticism in return. The rift between the two men, personally distressing to both, was never repaired.

Or was it? Monroe’s presidency echoed symbols and values evident in that of Washington: popular tours of the country, efforts to mitigate party divisions, and a foreign policy aimed at insulating the United States from entanglements in European conflicts. Perhaps the Revolutionary Rift between George Washington and James Monroe was, in the end, healed.

For further reading on James Monroe and George Washington, see an op-ed by Scott Harris, published in the Free Lance-Star on January 16, 2021. Scott H. Harris became Executive Director of the University of Mary Washington Museums in January 2018. This followed six years as Director of the James Monroe Museum, which is administered by the university. He was previously Director of the New Market Battlefield State Historical Park and Director of Historic Resources for the City of Manassas, Virginia.
Scott received his BA with honors in history and historic preservation from the University of Mary Washington in 1983, and an MA in history and museum administration from the College of William and Mary in 1988.